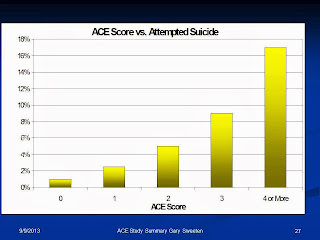 The very high correlation between Adverse Childhood Events and Anti-Social Adult Behavior with correlating diseases is astounding. "The proof of the pudding lies in the tasting," so goes the old saw, and we are seeing a lot of proof about what happens to people when they are abandoned as children. We see a tremendous amount of destruction coming from the behavior of young men reared without both parents in the home.

I am willing to bet that over 75% of the perpetrators of the random "Knockouts" in America are coming from young men who have no dads at home and never have had a dad in the home. I show the increase in alcohol abuse, drug abuse and criminal activity and the theme runs deep in our society. It also leads to homelessness, mental illness, suicide, etc.

Why are so many American leaders hiding from the data? Why do they refuse to agree with science? Why are so few churches aggressively fighting for marriage stability?  Great marriages foster healthy, wealthy children that beget healthy, wealthy kids who work, provide for their families and give charity to others. The lack of two parent homes is especially devastating for minority kids. Despite the hard data correlating a lack of stable marriages, the politicians continue to promote sexual promiscuity and anti family policies. Over 70% of all minority births are to single mothers who are then caught up in a vicious cycle of poverty, neglect, domestic abuse and brain damaged children who reinforce the cycle in a long term death spiral for our nation.

We can pray for each family and each neglected, traumatized child. However, the forces of evil are very hard to overcome and the number of addicts, homeless and uneducated explode. Churches have no real plan to fight against these "Spiritual forces of wickedness".

Depression escalates, self destruction grows and the national pain gets worse each year while politicians mouth compassion and load unbearable burdens on the backs of the poor.